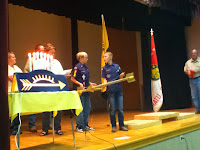 Tonight was Pack Meeting. My oldest son's last cub scout meeting. We all gathered in the cultural hall of the church and waited on our metal chairs. It was noisy and busy and wonderful...

I cheered as the boys received their hard earned awards. It is exciting to see something so positive happen in the lives of these amazing youth. 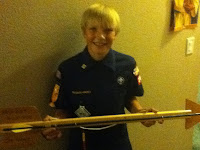 But, I couldn't be more proud of my oldest. As he got in line to get his many awards, I beamed with pride. After all, that was my boy up there getting all those awards. When all the packs had received their awards it was time to give the Arrow of Light awards to the two boys who earned them. My son and another young man (that is actually in my class). It was neat to watch the boys and their parents cross the bridge from cub scouts to boy scouts. The video below shows that part. They were greeted by their boy scout master on the other side. My son is very proud of his arrow of light, which is the highest award you can earn. And we, as his parents are very proud of him.