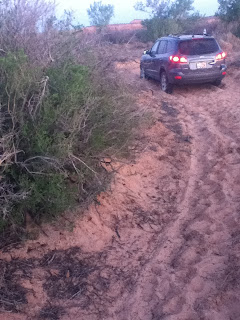 The last weekend was one heckuv an adventure.

Okay, just kidding.
From the title and the picture you can see that I am not speaking metaphorically here. This past Saturday, my wife headed to Springville with a dear friend for a meeting dealing with our Bountiful Baskets site here in town.

That left me, six children, and two good friends to hold down the fort. After a chill afternoon, we decided to head out to the new little geyser that my family had visited Easter weekend.

We made it out with PLENTY of sunlight left to burn. Because my trooper wouldn't even come close to making it that far, we went in Mr. Z's car. The trip out was fun. The kids were very entertaining, to say the least. When we arrived, the kids scattered like dandelion seeds in all directions.  (I would upload some pictures of the many adventures we had, but unfortunately my camera ended up going home with Mr. Z. Rather I am uploading a "stolen" image from Mr. Z. Hope he doesn't mind. I guess it IS my kids. :) ). When the time came to head out, I was totally expecting to get in the car and drive home. The kids were hungry and getting tired.

I was pleasantly surprised when Mr. Z put the car in gear and headed out towards the river area. I had wanted to go this direction, but wasn't about the suggest it since we weren't in my vehicle. We explored many little side roads and areas. At one point, we started to get into some really sandy areas. I warned my friend that I had previously been stuck in just such a road. He assured me that we would be fine and that the road we were on was "more exciting".  I just smiled and let him drive. We found a neat little road that headed down a pretty steep hill.  On the way down we knew we wouldn't be coming back up that one. It was VERY sandy. We kept driving because we were confident this road would circle around and lead back to the main road, which in turn would let us drive on home.

Sadly, that is NOT how it happened. The further we went the sandier the road became, until, we stopped altogether. I was laughing. Mr. Z was freaking out. He kept apologizing for getting us stuck. I kept telling him that life happens. Now, if you know me at all, you would think that I would be at Def Con 5 about now. I felt strangely peaceful (my wife told me it was because it wasn't my car that was stuck, and this may be partly true, but I wasn't worried in the least- a different feeling for me.) and the kids were easily entertained with the snacks and water I had decided to throw in the back.

We tried for well over an hour to get the car unstuck. It was no use. Mr. Z and Ms. D finally agreed that the time had come to call for help. "Do we call a tow truck or 911?".
"We call my dad!"
They took my phone and headed out in hopes of finding a bar or two of service in the beautiful area that was holding us prisoner. I was told to stay with the herd. While they were out seeking help, I took my 6 herdlings on a walk around the area. We made a horrifying discovery. The road ended about 50 yards in front of the car. So even if we COULD/DID get the car out, we would have to either cross-country it, OR revisit the sandy road. Good thing we were calling for backup!

Mr. Z and Ms. D were able to reach my parents who high-tailed it out to the area and found us without much problem. I think it was because of the prayer we said as a family (and friends). My daughter was getting pretty freaked out thinking we would have the spend the night in the car. I told her we should pray when we get scared. So we did. I think it helped.

Within the hour after my parents arrived, we were ALL headed back to good old GR. I rode with my parents as all my children, minus my oldest, were in grandma and grandpa's truck. I was okay with that. It was nice to visit with my parents. I hadn't had a chance to do that in a while. My oldest rode with Mr. Z and Ms. D.

When we arrived my mother gave Mr. Z a hard time for NOT driving a Chevy. After we got home and dumped the half sand dune of dirt out of our shoes and clothes, we had cold cereal and toast and visited until 2am. My wife made it home sometime around 10:30pm and we filled her in on the details. She laughed at us. I wish she would have been there to enjoy the humor, the beauty of the area, and experience of a lifetime this was.

Who would have thought that getting stuck in the sand could be so enjoyable.

Thanks for a good adventure Mr. Z. Please come and visit us again soon!