PRODUCT REVIEW: Over the Moon

I am pleased to finally share my unpaid review of the Over Moon: The Broadway  Lullaby Project which was conceived and created by Kate Dawson and Jodi Glucksman. 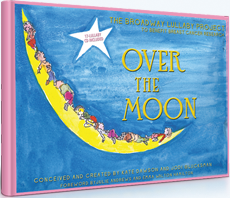 There are three separate pieces that can be purchased. I will only be reviewing two of them- the hardback book and the 2-CD set.

First, the book.
When I received the book in the mail, I was  immediately drawn in. The cover art is simple in appearance, yet full of detail when inspected closely. My next thought was what would be inside a book about lullabies?!?!
Well, let me just tell you that it is AMAZING. Before I did any reading of the lyrics or listening of the music, I spent time looking at each and every drawing. Some were more amazing than others, but ALL of them were very intriguing and caused me to look at them again and again.
Next, I started reading the introductions and foreword. (The foreword really caught my eye because it is written in part by THE Dame Julie Andrews. How cool is that?). I was truly impressed by the creators and the reason this project came into existence. This book is a tribute to creator's late cousin who lost her 5-year battle with breast cancer. I got chills when I read that Ms. Dawson's cousin would give expectant mothers a CD with lullabies, and this was unknown to Ms. Dawson until the completion of this project.
Finally, I was moved to see that a portion of the proceeds will be given to multiple breast cancer charities such as the Breast Cancer Foundation and Young Survival  Coalition. So not only is this an amazing piece of art, it is for a wonderful cause!
With over 88 current lyricists, vocalists, musicians, and artists working together on this project I had high expectations. I will honestly admit that I didn't know a majority of the 88 people involved, but the hype around this book had me expecting a lot.

My Verdict: After listening to every song (some completely through, and the rest for a good portion) I must say that I am truly impressed. As a musical person myself (singing/piano/saxophone/composition) I feel that I have become somewhat of a music snob. This CD did not disappoint. The music was moving and relaxing. Would I listen to this CD on the way to work? No, because I would be snoring in a heartbeat (which, remember is the POINT of a lullaby CD).
Will kids love this? Let me tell you what happened with my 6 children. They were in the room when I started the music and they all stopped and gathered around my laptop to see what I was doing. They had to see the pictures. I had to fight to get my book back.
I would HIGHLY recommend this book to teachers, parents, expecting parents, grandparents, and everyone in between. Cover Priced at $18.95 you won't regret a single second of this purchase. I also think that this would make an awesome gift for expectant mother's. The music is so soothing that mom could enjoy it for several weeks before the wee one arrives to share it with her. 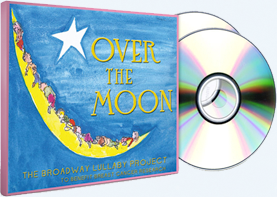 This two CD collection was also sent to me to review. What you would get when you purchase this set includes a 24 page booklet along with the 2 CDs. Since my review copy was a pre-release edition, did not have that, so I can not comment on what it contains. However, I am sure that if it matches the quality of everything else I have seen, it will be excellent.

These CDs contain the original 17 songs from the book, plus 9 additional songs. Again, all of them are wonderful and soothing. In fact, while they were playing, I opened the hardback book and enjoyed the artwork from it again.

I am not sure what else to say about this set. It was well done, the artists performed exquisitely, and I thoroughly enjoyed having the opportunity to review it.

Again, a portion of the proceeds will be given to multiple breast cancer charities such as the Breast Cancer Foundation and Young Survival  Coalition. So, even if you only bought this to support those charities, it would be well worth it.

My Verdict: I would recommend this product to those who want a soothing soundtrack for themselves or their little ones. All my kids (years 11 to 1) commented on how well they liked many of the songs.

What you get:
-2 Disc Set with 26 total songs (13 per disc)
-1 Twenty-four page booklet (again, I did not receive this part of the set to review)


The third product that is available is an iPad,iPhone, iPod application that basically combines both the CD set and the book. From reading about it, it sounds fantastic, but again, I was not given this part to review.

It was a pleasure to have the chance to review products again. I enjoy the opportunity to share my opinions and feelings based around 12 years of teaching experience (not to mention being a father).


Again, a reminder that this was an unpaid review (and I am NOT getting paid for linking to Amazon).

Thanks for stopping by,