Our 24th day here! It has been a good, but long day.
The best part of this day was that my wife got to hold her special little girl. I can't describe the feeling of joy and peace I get when I see her looking at her baby. The instant love, joy, and overwhelming need to hold her little one fulfilled is almost too much on my emotionally drained soul. Our baby looked so perfect in her little sun dress (see picture) from one awesome auntie! Thanks to you...you know who you are! 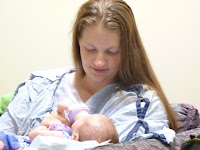 As you can see from the picture below, I think that I may have enjoyed holding my little princess as well. She is so perfect. So sweet. So innocent. I just feel peaceful when I hold her close and think of how sweet she is. How fresh from heaven. I always wonder what special message theses little ones are supposed to deliver to us. 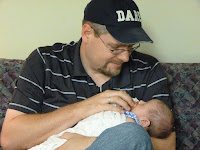 Today started for me at 6:15 am when the alarm went off and I nearly jumped out of my skin. I found that I had fallen asleep with the lights on and the TV running. My notebook was on my lap and my pen was still in my hand. I think I was just a little tired. I moved the notebook, rolled over and slept until 7:30am. I was up, showered, and greeting my wife by just after 8am. I think this whole experience is really finally starting to get to me. I thought that I was strong enough to make it to the end, but I am not so sure anymore. 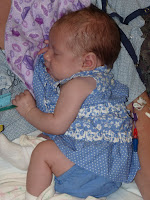 While we were visiting today (the Adult-ICU nurse had opened the physician consultation room that is just off the regular visitor's room so we could be away from the other people in the waiting room on the second floor) the doctor that had performed her hysterectomy "found" us and went over the information we had been hoping to know more about.

I got to relive all the horror, guilt, anger, and relief as he explained what he had been a part of in her first surgery. He explained that he had been there when the the surgery started, but had to leave to do a C-section. He returned over an hour later to find them working to identify her internal organs because the infection was so bad and rampant that they couldn't decipher organs. They had to have a urologist come in, the OBGYN, and I believe two surgeons. Over either hours later they finished. He said that  she was so full of infection that they couldn't even find her ovaries or tubes. He mentioned several times he was appalled at the number of abscesses and the level of infection that was in her body. He also commented repeatedly how surprised he was to see her looking so good. That was the good part.

We have an appointment set up for 3 weeks from now in Orem with a doctor that comes highly recommended by a close friend (thanks Becky). It was quite humorous actually because Dr. Lichti told us there really isn't any one in Price we could go to. We totally agree on that one! Price really isn't ever an option in the future for medical care...

We also had another visitor today. Philip Zwahlen stopped by with a book his wife sent for me to read. It was written by his wife's sisters. It is called Mark of Royalty. I have only read a couple chapters and I like it a lot! Very interesting story line. I am excited to finish it so I can get it back to Julie. I may have to buy a copy for my classroom. I think many of my students would like it...at least what I have read so far...

Kristin Robertson is the angel that brought our sweet baby to see us. She ran some errands while we fussed over our little one. Kristin, as have countless others, has gone above and beyond to help us. We can't tell everyone how much we appreciate all the help we have received. I know I type that everyday, but it still seems far from adequate.

When Kristin returned from her errands, we were told we would get to move to the 6th floor of the medical tower. Wahoo! The nurse still needed to remove the staples from her incision and also remove her pic line. I was proud of myself for not passing out as they removed all the staples (I did have to sit down, but I held the plastic tray and counted them as the nurse removed them). We counted 44 staples. I am sure that the count is a "give or take one or two" situation. But, remember...I didn't pass out!

The PIC line was another story all-together. In order to remove the PIC line, they had to first add a smaller IV line on her arm. It took them two nurses, four tries, and two blown veins to get it in. I was totally sitting down through all of that part. Watching, but sitting as to avoid the floor. Then, when they finished, her nurse pulled out the PIC line. As you can see from the picture, it was in there a long, long ways. Phew. Glad that I was sitting down. After all that was said and done, we had to load up all the "stuff" what we have collected (in two wheelchairs. One for her and one for all of the "stuff" we have been hauling around).

We got my wife settled in and I went and got the baby and Kristin who were still waiting on the second floor. From there we enjoyed a relaxing late afternoon visiting, eating dinner, and holding the baby. All too soon, it was time for the baby to go. The nurses finally got my wife's dinner tray to her TWO HOURS LATE! Because she moved floors at meal time, her tray wasn't moved with her and they had to order a "late tray". When it finally came, there were three of them because they had called multiple times to get a tray, so I got a second dinner...just what I needed. But it WAS good. (The cafeteria was having "school days" tonight when we went to eat. I was totally like, SERIOUSLY???? So I had a corn dog and tater tots for dinner. Blah....).

As you can see from the picture, this room is on the little side. I mean...WOW! Just another reason to GET OUT OF HERE! In fact, her info board has a spot for a daily goal and I wrote" Get Out Of Here!". Probably not nice to the nurses on this floor, but I mean it as OUT OF THE HOSPITAL. 24 days is a very, very long time!

That bring us to now. I have been writing this post for almost 2 hours (off and on, probably more off than on) as I have helped my wife, checked FB, and e-mailed. I am excited that our saga here is coming to an end. It is surreal to think that in just three or four days I can be sleeping on my own bed, knowing that my babies are all in the next room, and that this whole ordeal is behind us. I think a part of me will always be worried about infection in my wife or children. But, I also know that I will be much more proactive in the future.

I guess I best sign off as it is late and I need to get to the Guest House and get some sleep. My eyes feel like they are going to fall right out on to my key board...