Day 35 = Saturday = Whatever...
Friday wasn't exactly what I would call a great day. It was another angry day. I had had it with everyone and didn't want to talk to anyone. I eventually ended up in my classroom and was able to stay there for quite a while working. That felt nice. Nice to be alone. Nice to feel productive. I sat for so long at the hospital having nothing to do but worry, that it was nice to have a different way to use my time. I also took a great nap in the afternoon, something that I rarely do, but decided that since I was still feeling exhausted from dealing with a crying baby at night and then trying to work outside during the day, was justified. Having had heat stroke in the past, I get overheated rather quickly and so I get drained pretty quickly when working outside in the summer.
I even went to bed at 10pm last night. Mostly because I didn't want to see or talk to anyone, but also because I was tired and wanted to get a good night's sleep. Having to be up early for church meetings was going to be near impossible with the lack of sleep I had been feeling. So, yea me for catching up on my sleep.
My wife had a good day. Home health came and said her incision and such looked really good. In fact they said it looked SO good they think they may only have to come one more time. We shall see. I don't want them to stop coming if they have any questions at all. Because I WON'T do this whole ordeal again.
The kids returned from camping with grandma and grandpa Millett in St. George. I guess they had fun. I haven't really taken the time to sit down and ask them about it. They came home with lots of treasures (including a tadpole which my daughter called Moe Bob Hughes), so if that is any indication of fun, then I am sure they had it. 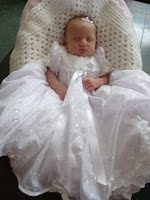 I was up and going at 6:05am which in it self is a miracle. Of course I didn't deal with the baby at all last night. Having to be up early, I didn't even flinch when she cried (if she did at all). I guess I was more exhausted than I thought.
My meetings were meetings. They weren't great, they weren't bad. They did announce at church that some amazing sisters in our ward are putting together a benefit dinner and game night in the city park. I probably turned 6 shades of red while it was being announced. See, I sit on the stand during the first part of the meeting, and I could feel lots of eyes on me while the bishop went on and on about the event and encouraged everyone to attend. I am so humbled by the efforts of so many. We have been very blessed with all that is being done for our little herd. We probably really aren't so special as to warrant all of this attention, but it is very appreciated.
After meetings, we had several of our family members and friends over to be apart of blessing our sweet little baby girl. It is only a month later than we had hoped, but she is finally blessed. It was such a privilege to be able to do that. We also really appreciate all those who traveled to be apart of it. 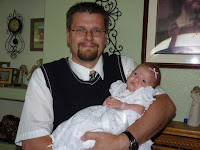 The rest of the day has been spent in watering the garden and lawn, which the 100 degree temperature has caused to turn a little crispy. when that is done I plan to do NOTHING.
I love Sundays. 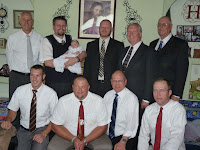