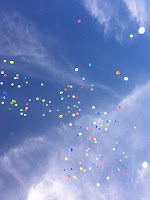 As we stood in a circle, arms extended to symbolize unity and trust, the excitement continued to build. We recited the required school wide cheer, "I will keep the color in me. I won't do drugs" and then released our anxious friends who wanted nothing more than to soar into the blue-stained sky. Cheers erupted and excitement continued to be felt and shared as fingers pointed and words like "Mine is higher than yours" and "Wow! Look how beautiful" reached my ears. As the colors faded and the sky devoured our humble offering we wandered back inside the building. Back to "real" life. Science. Cells. Grades. Planners.

These thinks have evolved into full-grown thoughts. 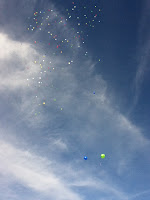 The more I think the more I realize that I am jealous of those lighter-than air happy makers. Not because they are more handsome or pretty than I, but rather because they were able to escape their anchors and soar, reaching for more than they really are. Providing those around them with happiness and positive comments.

Jealous because they left their troubles behind when their string was released, climbing ever higher.

Jealous that, even though they would eventually fall, it wouldn't be where other would see or even know about it.

Jealous that even in their lesser form, they have still achieved more than I will ever know or do...