Dr. Seuss is such an amazing writer. He ability to bend the rules of writing and poetry astound me. He was the perfect name to bring up as I introduced Part B of Musical Language to my students.

I had a hands-on lesson planned for this tool. After we talked about Dr. Seuss for a bit, I started by having the students listen to a story by Jon Scieszka and Lane Smith called Baloney. If you haven't ever read this book you need to! It is such a perfect example of invented words. It is about a little alien that is late to school and has to give an excuse as to why. So, he makes up a HUGE story and invents words to describe many of the items he uses and encounters.

My students LOVED it! Then, it is fun to tell them that almost all of the "made up"words are actually REAL words from several languages around the world. 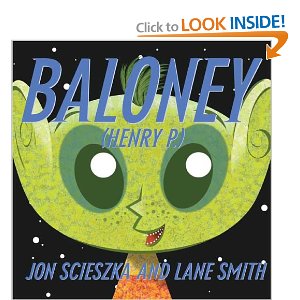 After I read them the book, I told them they were going to list 10 words for those 10 items around the room and then make up a new word for that item.

I modeled for them so they could see what they were supposed to do.
I chose:
desk
chair
teacher
clock
pencil

The kids just raised their eyebrows at me. Undaunted, I proceeded to explain to them that they were going to use these words in a poem. Then I used those words to write a free verse poem as a model. This is what I wrote:

The Classroom
I was sitting on my popsquat
Watching the tell-timer tell time.

My talkity-talk was going on and on
While I watched the tell-timer tell time.

My higrate was tapping on my sked, not writing my notes
While I watched the tell-timer tell time.

But, when my talkity-talk tapped on by sked,
I knew my time-teller watching must end.

I was very pleased with myself. I turned to see uncertainty on their faces. I laughed at them and told them to get started on their own list and poems. I was actually quite impressed with what my students were able to create.

A few students got stuck on how to rename things. I told them that an easy strategy was one that I had used. I asked them to look at my first word and the new word I had made. They pointed out that I had just mixed up the letters of the "real" word. The light clicked on above their heads and they were able to move forward and finish their lists and start their poems.

It was hilarious to see what they came up with. After they finished making the "new word"list and writing their poems I had several students share with the class using the document camera. Below are a couple of examples. 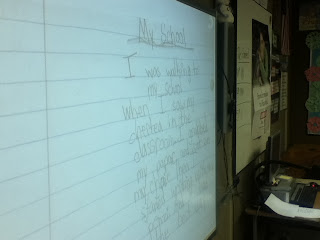 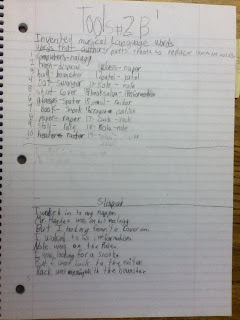 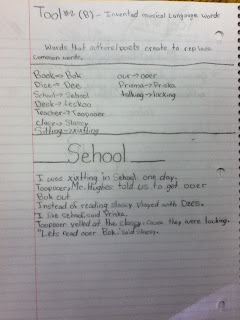 For the second part of class, I wanted to get a start on Part C as well!

Anyways, Part C is Alliteration. The students had heard the word, but couldn't place it's meaning. I said, "Let me share an example of an alliteration with you!" They sat and watched me expectantly. I think they thought I was going to do a back-flip or something. I just stared at them for a moment. They started to get all fidgety like they were in trouble. Then I blurted out, "Betty Boughta, bought some butter, but she said, "This butters bitter, if I put it in my batter it will make my batter bitter."

They looked at each other, and then at me and all together said, "What did you just say?".
I laughed and repeated it.

I then shared Peter Piper picked a peck of pickled peppers with them. Someone finally shouted, "OH, alliteration means tongue twisters!"

Well, that isn't really what I was hoping for, but it was a start. I guided the discussion to help them understand that alliteration is about the BEGINNING sounds of words. I shared a few more examples out of this book: 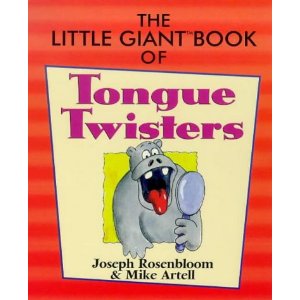 I didn't link it because it is out of print and very costly right now.
Then I handed out my trusty poetry books and the students went on an Alliteration Hunt. When they found an example, they raised their hands and shared with the class.

It was fun to watch them discover that alliteration is found in short groups, in phrases, and in entire poems.

The poetry hunt brought us to the end of the class time. I was sad as I hadn't quite finished my planned lesson, but I knew I could add it on to the beginning of the next day.


Their homework assignment for the night was "Jabberwocky" by Lewis Carroll. The students were to underline the common nouns, circle the proper nouns, and then choose one of the stanzas and try and guess what the invented words that Lewis Carroll had invented were supposed to mean.

Thanks for reading post #3 in this series. If you missed the first post, you may want to start HERE and catch up. :) If not, that's okay too. I am just so pleased that you are here. Don't forget to follow my blog to get all the latest news, updates, and more.