Welcome back to Post #5 in my Journey into Poetry Land series. To read all the posts in the this series, click HERE to see all the posts from this blog. My first posting was on All Things Upper Elementary, of which I am a contributor. The rest of the posts are located here, on An Educator's Life.

I am going to skip my Monday lesson as it was a noun review of common and proper nouns. My kiddos were NOT getting nouns. However, I did post about it over at All Things Upper Elementary if you want to read about that lesson. For the actual lesson, click HERE.

Tuesday, we started and finished Part D of Tool #2. Vigorous Verbs. I LOVED this lesson.

We started by correcting their homework from the previous day. It was the "Full Fathom Five" by Shakespeare. It is a short, but powerful poem full of alliteration, beat, rhythm, nouns, and I believe some onomatopoeia.

Then, we turned to the "next clean page" in our journal and wrote: Tool #2-Part D- Vigorous Verbs.
I then asked the kids to write a definition for "verb" and for "vigorous". You can see an example in the pictures below. After letting them share their guesses, and before I told them the answers, we did a little activity.

We read a poem together. The Turkey Shot Out of the Oven  by Jack Prelutsky. What a fantastic poem for strong verb usage, not to mention the kids think it is totally hilarious.
We talked about which words are STRONG verbs, and I would challenge them to give me "weak" verbs to replace the strong verbs so they could hear the difference.

We talked about how -ing verbs are strong verbs. Even in the Turkey poem, "ing" verbs were galore! I then told them that they were going to write a verb poem that was weather related. They raised their eyebrows at me. I am starting to feel that I am not a great teacher of poetry...ha ha. I get looks of confusion a lot during these lessons.

I knew that they would need me to model, so I showed them the process I went through to write my own "ing" poem. I showed them a poem that I had written as an example for them:

Listening, light fading, the day quaking.
Whispering, reaching, touching it comes.
Nearer, Nearer we hear,
Screaming over the hills and down into the light-less valleys.
Grasping, tearing, pulling what is not held firm to the earth,
Howling, whining, fading, departing,
Leaving trees shivering and houses sighing.
The wind.
-Mr. Hughes January, 2013

I don't know that it was much help, other than I was able to underline all the "ing" words for them. I had them get started and worked with smaller groups to make it more clear to them. Here are several student samples that were written: 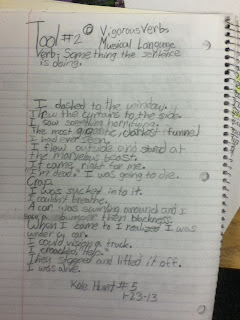 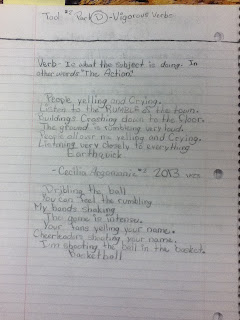 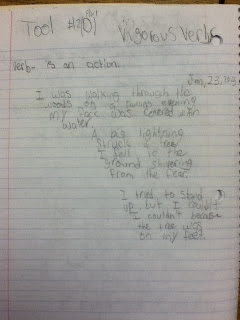 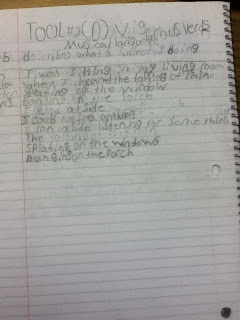 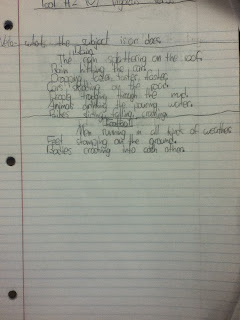 We ended the class by sharing a few of the poems that had been written. It was great. I was beginning to feel that maybe they WERE understanding just a little bit. If nothing else, many students have commented that they now like poetry and it is not what they thought it would be.

For homework, the students were assigned the poem, Listen to the Rain by Bill Martin. Such a powerful poem for strong verbs, and all the other "goodies" we had been discussing. And, I had a surprise ready for them the next day that went along with their poem.