I guess it has been just a little while since my last post. I won't apologize for it. I have been busy doing "life" type activities. A lot has happened. I have skipped a few things that I hope to go back and hit on later, or not. We'll see.

I guess I should document that about a month ago (right after they installed our new furnace) we ended up with a mini-lake under our house. I called on a good friend to come and help us try and figure out what was going on. Long story short, we couldn't find ANY place that the water or sewer lines were leaking. So we called the furnace people to come and check it out. They did have the high-efficiency  furnace dumping 3-5 gallons of condensation under our house. It took several trips for them to get it figured out, but we are going on 3 weeks with not mini-lake. I am grateful for that. I still need to repair all the insulation and tarping under that house that we had to cut open (and Weatherization had just fixed all of it) again. But, it did allow all of the insulation to work on drying out. I figure I will deal with all of that this summer when it is warm and I have more time to deal with it.

Now, back to this past week and the upcoming week.
Friday was spirit day at school. I am not a big fan of dressing up, but I did want to show my class that it is easy to do. It was hippie day. I think my outfit turned me more in to and 80's biker, but it's all good. It's the thought that counts, right? 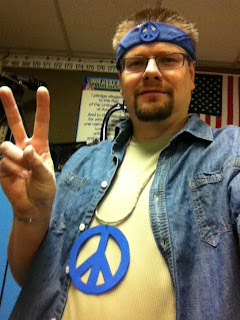 One of my students altered his shirt to read this: 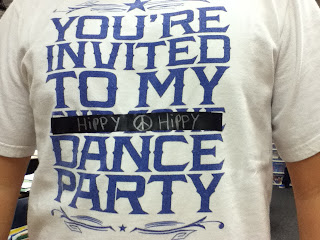 I thought it was pretty funny. I am so thankful to have such a great class this year. We have had a great year and lots of learning has been going on.


Tomorrow is 100's day. I can't believe that it will be the 100th day of school. I am sad because my son is more that 1/2 way through this 6th grade year. I will miss him so much next year.
For 100 day, I asked my class what they wanted to do for a hallway display. They all quickly decided they wanted to share their top favorite 100 books. So, we went to work making lists, ensuring no book was duplicated, and finding the book covers on Amazon. We copied and pasted all 100 books, printed them, cut them out, and glued them on. I think it turned out AWESOME! The kids were very pleased with it. It was a three day project...but it was worth it! 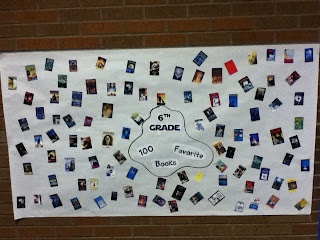 Since my wife and I got bikes for Christmas, we have taken to going on as many rides as possible each week. We are usually able to squeeze in one or two depending on the weather. What a blessing. I love this picture I took with riding. Of course I almost wrecked my son and I getting this picture. He is such a great cheerleader, especially going up the hills. "Come on daddy, pedal faster..." and "You're going to slow daddy, pedal..pedal...pedal..." I can usually make it up the hill with that much cheering behind me. 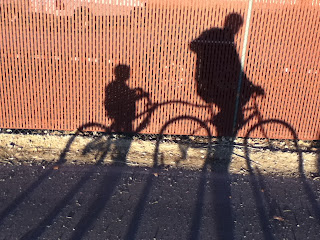 My two little babies LOVE their bike trailer. They are a little fussy during the loading phase, but once we get moving, they happy right up. This is my princess munching on her seat strap and enjoying the view. 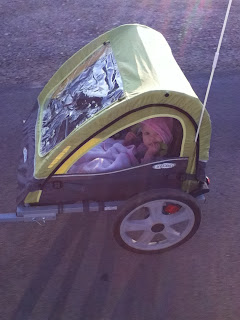 (Friday was my oldest daughters birthday. I will try and blog on that later. If not, check out my wife's blog. I am sure she will have a mega-post on it soon!)

Saturday I told my wife that I didn't want to waste the day sitting around doing nothing. We decided to do a picnic at the geyser. We invited my parents to come along as well. I am thankful they agreed to come. It was a bit chilly when the breeze would blow, but it was still a beautiful day. My little boy was cute. I told him to sit on the rock to eat his lunch, but instead he wanted to kneel on it. Since he is at the age where he is going to do it his way or NO way, we just let him be. What a cutie. 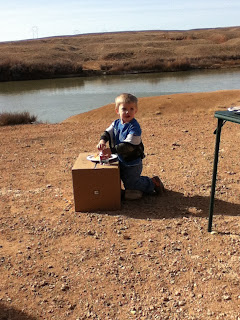 Grandpa went to check out the geyser and his little "shadow" jumped up and followed along. Thanks grandpa for being patient with him. 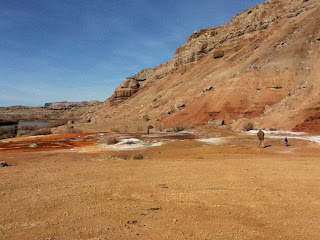 When we decided to take little lu lu for a "stroll" my little man wanted to push ALONE! Unfortunately the terrain didn't allow for that. He quickly tired of having help and took off for more adventurous parts. 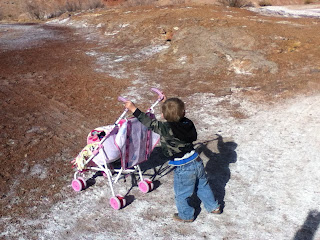 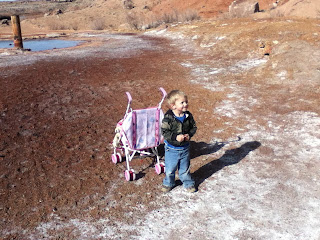 Since I was privileged to have my little one to push around, we went for a stroll on the yellow mineral deposits from the geyser. I love the patterns that have been made over the decades of water running, standing, and evaporating. I took three pictures at different distances so you can see how different it looks. 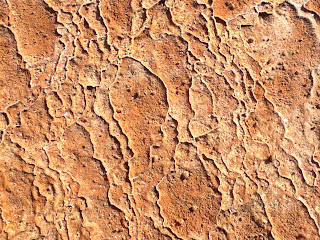 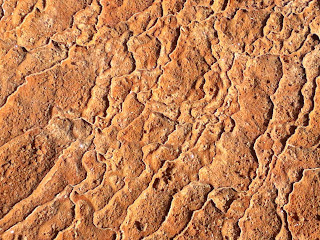 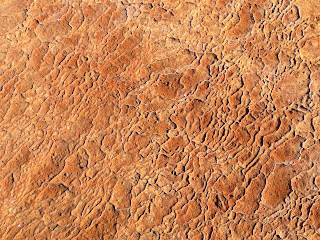 After our little stroll, we headed over a hill above the river. I sat down next to my princess and chatted with her while I threw pebbles into the river. She was tired, but she did give me a great smile. Below her is what she was content to stare out. Can't blame her...it was beautiful. 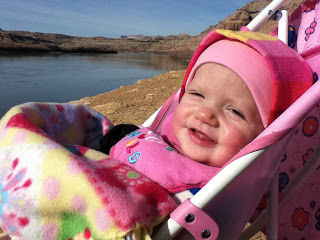 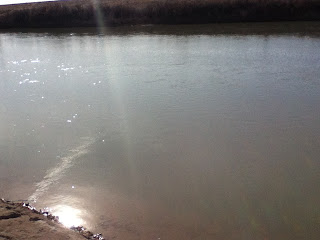 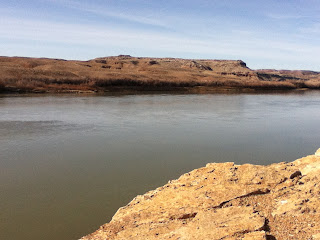 Today (Sunday) after church, my oldest asked me to go out and shoot some hoops with him. I never can seem to find (or make, as hard as that is to type) the time during the week, so I agreed. We had a great
time. While we were playing, my youngest son came out the back door, gathered up his "cooking supplies" and headed out my the basketball hoop where we were playing and went to work "baking". I was called over several times to check out his batter. Oh my little one...I love you! 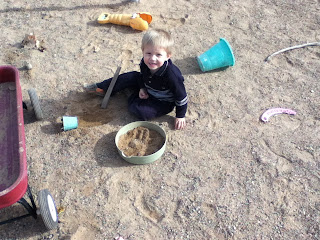 My crazy 4-year old wanted to play ball as well. He would get a running start and then jump and throw the ball. It was fun to watch him cheer for himself when he actually made one. I must admit that life with out this child would be BORING! 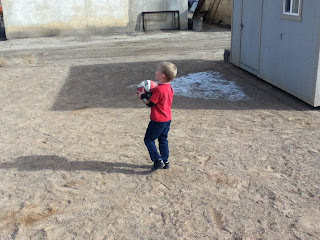 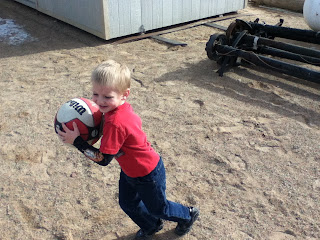 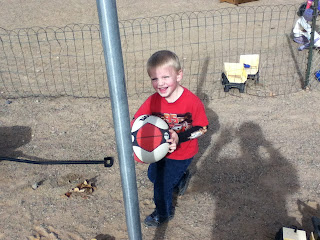 So...that concludes our wonderfully long weekend. Other things happened...like changing our our washer hoses (thanks dad), and going for an amazing Sunday drive through the old missile base from the 70's, and visiting with grandma and grandpa Hughes several times. I must say, I haven't had this fulfilling of a weekend for a long time.