An Adventure in Hunter's Education Week 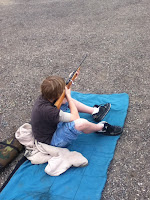 I stood silently praying that he would be able to pull this off. After all, this final test came at the end of a week long three hour class (7pm to 10pm). That event put quite the kink in the running of our children's routines. I knew that I didn't want to survive this experience again next year if he somehow didn't pass. In the first round he grouped four out of ten shots together. My heart was filled with gratitude that he was doing so well. After all, standing was his weakest position to shoot from.

We mounted a second target and he moved to his sitting position. He was confident that he would do very well in this position. That made me feel better. He loaded his first five into the clip, prepared to shoot and went for it. After ten shots (and the end of all the other shooters) he grabbed his target.


My heart sank a little. He was a little scattered on this target. When it was scored, we only stood at ten. He received a score of six on the second round. With my heart in my throat, and a struggle not to expose my inner anxiety (which I knew would not help him at all) we attached his third and final target to the box and got it set up and ready to go.

The third and final position was prone, or lying down. He was very confident that he would rock this one.He HAD to get a score of at least five out of ten in this round AHHHHHHHHHHHHHHHH!!!!!! That is what I was screaming in my head.

Inside I was about to explode as I watched him calmly shoot his first five. As he reloaded the clip with his final five shots, I asked him how he felt he was doing. His answered chilled me to the bone... "I don't really know dad. I am getting nervous". AHHHHHHHHHHHHHHHHHHHHH!!!!! My words to him, "You can do it son! Take your time. You only need five and you still have that many shots still to go". He smiled and positioned himself to start firing again. Me? I simply returned to praying like nobody's business. He finished, opened the chamber, gently set the gun down and stood. We looked at each other and I could see very clearly that he was very unsure of what was about to transpire. When the range was declared closed, he ran like a gazelle hoping to escape a rabid lion. He picked up his box and I couldn't quite read his expression from where I was standing. He came running back and we looked at the target. I quickly handed it to the instructor with the comment "I am sure that this is where the real heartbreak begins". He grunted and agreed. He took my sons target and used his template to score it. This was the moment of do or die. I knew that if the result was less than five, it would be a long day and weekend in our home.

With our breathing at a complete standstill, we watched as the instructor took the target and wrote a number on the top. I looked at my son. He looked and me and then he started running around and cheering! HE HAD DONE IT! He scored seven out of ten on his final round. Oh the joy that filled my heart (and his)!

His grandmother was cheering in the truck (silently to us as the windows were all rolled up). He called his mother and totally freaked her out by pretending that he ad not passed.

To celebrate we took him to lunch.

It was a fantastic day.